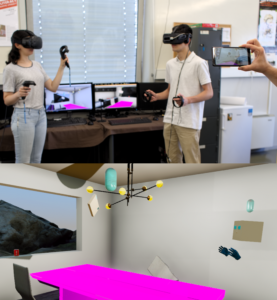 With the democratization of the use of virtual and augmented reality devices a totally new way of creating and visualizing 3D environments has emerged. This presents a challenge for media content providers, to game developers, to technology mediated industry and multimedia consumers in general.

This project will design and implement a framework for the assisted creation and edition of virtual environments to be used collaboratively in Virtual Reality (VR) and Augmented Reality (AR). The objective is to explore new interaction paradigms for editing content inside VR with the assistance of AR markers and procedural content generated algorithms.

The main solution will be based in a central virtual simulation system capable of accepting connections with several AR-VR headsets, smartphones and interaction devices. This framework will be divided in three modules:

The development of this framework will be important for the creation process of virtual environments and for the interaction in AR between real and virtual scenarios. To evaluate the framework a demonstrator will be created in the laboratory. Additionally, two use cases, one in an industrial environment, and other in a tourism location will showcase its features.

This work is financed by the ERDF – European Regional Development Fund through the Operational Programme for Competitiveness and Internationalisation – COMPETE 2020 Programme and by National Funds through the Portuguese funding agency, FCT – Fundação para a Ciência e a Tecnologia within project POCI-01-0145-FEDER-030740 – PTDC/CCI-COM/30740/2017